The Good Things in front of the Fireplace

Author's Notes:
Hello, wonderful people.
This isn't a fic, this is a fever dream. I can't believe that I wrote something like that. While there's no smut (I'd never), there's a lot of kissing and touching included, and it's very bold for my usual writing.
Anyway, I hope you'll enjoy some sweetness and tenderness between John and Rose.
I pray it's not too awful. I'm a little worried about posting it, truth be told.
Anyway, here it is. Good luck to all of us!
P.S. Dear SunnieBelle, this is a small thank you for your big support.
P.P.S. Thank you all who helped to imagine what John's cologne would smell of. 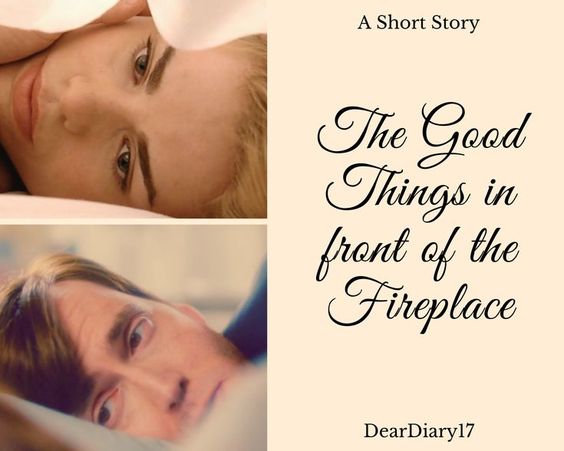 John ushered Rose into their little cottage. They were both giggling silly, cheeks red from the frosty rain droplets. It was surprising, really, that it was raining instead of snowing, for the air was nippy that morning.

He hastily took off Rose’s soaked coat, hanging it on the coat rack carefully before shaking off his own woollen coat and putting it next to Rose’s. The thoughtful gesture made Rose smile gratefully at John. He was always so caring towards her…

John steered Rose to the sofa in front of the fireplace with his warm palm pressed snugly against the small of her back. She protested by stepping aside to the linen closet to retrieve some towels to dry their hair. Rose’s hairstyle didn’t survive the onslaught of nature, and she was grateful to her morning self for not putting any pretty pins into her hair because she lost several to the howling wind. She would be wretched if she had lost the rhinestone-encrusted pins that John bought for her two weeks ago at the fair.

Rose sighed happily as she blotted her hair dry, pulling out a stray pin here and there, and watched John fuss with the fireplace. The cottage staff was sent on an impromptu paid holiday because Rose and John wanted to to be alone for several days to celebrate the three months of their marriage. It wasn’t even a proper anniversary, not per townspeople’s opinion, but John and Rose couldn’t care less about what people thought about them, and two maids and a cook couldn’t be happier to visit their families without worrying about money.

Rose’s lazy musings were interrupted when she felt John’s too-warm palms press to her neck, and she moaned blissfully when she felt his fingers brush through her hair gently. They both flopped down on the sofa in front of the fireplace gracelessly, laughing in unison.

John started to unwrap the layers of Rose’s gown, savouring each button. Rose kissed his forehead and inhaled the sweet scent of her husband, the unique mixture of ink, bergamot and citrus, increased to an intoxicating level by the rain. She closed her eyes, overwhelmed by the touch of John’s fingertips dancing daintily over her cheeks, and her head dropped backwards when John placed a barely-there kiss on the left side of her neck. Rose plunged her trembling fingers into the knot of John’s bowtie and tugged wildly, jerking his body closer to hers and eliciting an amused chuckle from him.

“Be patient, love,” murmured John into her lips, “good things come to those who wait,” and he untied the bow of her sash before standing up from his place on the sofa and lowering down on his knees in front of Rose.

He lifted the hem of Rose’s skirt and looked up at her from beneath eyelashes playfully. She groaned when John started unlacing her shoes, and Rose wondered how such a simple, bland task turned into a sensual gesture by her husband.

John slid off her ankle boots smoothly, laces tamed and not tangled, and Rose marvelled at John’s skills. If she were to take them off herself, she’d have tangled the stupid laces for sure, and she’d be puffing, annoyed, at the way her instep always got stuck in the shoes. Silly trappings! If only they made comfortable footwear for women like they did for men…

Rose’s eyes went cross in pleasure when John slid off her stockings, nimble fingers detaching them from her corset quickly, and folded them carefully, deliberately, on the side of the sofa. He then proceeded to untuck the laces of his own shoes, smiling at her mischievously, and took both pairs of their shoes to put in front of the fireplace.

“To keep my Rose warm,” he would always explain before kissing her nose gently.

John sauntered lazily towards Rose, eyes dark, hypnotising, and Rose licked her lips hungrily, asking herself, “How long will this bliss last? How long before John and I turn into a bickering old couple who can barely stand each other from who we are now?”

Townspeople smiled at them, cooing at the newlyweds adoringly, and advised John and Rose to enjoy their shared happiness while it lasted, before the domestic chores and responsibilities took hold over their lives. No matter how much Rose resented the mere thought of John being fed up with her, and her being bitter towards him, she still had some doubts.

Rose’s weak doubts were swept away with the waves of John’s affection, however, and she kissed him ardently, and she took off his cotton shirt, enjoying the warmth of his wiry body.

Rose was about to lament once again when John stopped his work of unlacing her stays half-way but smiled deliciously when he pulled her up and hugged her from behind.

Rose inhaled deeply and dropped her head on his shoulder, basking in the feeling of his arms around her.

“Heaven truly is a place on earth when he’s around,” she mused.

Her stays ended up on the floor, as her skirt and petticoats did, much to John’s dismay, and Rose moaned into his lips in protest when he tried to pick them up. John surrendered without too much protest, and led them in the direction of their bed.

They dropped on their bed in an ungraceful heap, too distracted to evaluate the real distance between the sofa and the bed. They roared with laughter when one of the funny-sitting coils pinged comically under their weight, and Rose thanked the heavens for such a light-hearted moment. Mercifully, the intimate mood wasn’t spooked by the lovers’ giggles, and Rose rolled her eyes in delight when John slid the lace straps of her chemise down her shoulders.

Rose was grateful for letting the house staff go, and closed her eyes, enjoying the gentle kisses on her skin while trying to locate the buttons on John’s trousers.

Rose awoke slowly from a lazy slumber, unsurprised. It was simply impossible to not fall asleep while cuddling with John, so strong was the blessed, safe feeling that surrounded Rose whenever she was with him. She squinted her eyes, silently chuckling at John’s snoring lightly, hugging her from behind, and looked around their bedroom.

It wasn’t long before her gaze fell upon their boots standing in front of the fireplace, drying, warming up after a rainy day out. A mellow, balmy feeling appeared in her heart, in her soul, filling her body to the brim with a gentle glow.

Their shoes. Side by side. In their bedroom.

Rose closed her eyes and snuggled deeper into John’s arms, already feeling the sleep tugging at her conscience.

Good things come to those who wait, indeed.