The Kitten and the Blue-Eyed Bloke by DearDiary

Summary: Rose is stuck in the basement until there's a stranger to help her out.
Rating: All Ages
Categories: Ninth Doctor
Characters: Rose Tyler, The Doctor (9th)
Genres: Alternate Universe, Fluff, Standalone
Warnings: None
Challenges: None
Series: None
Published: 2021.11.20
Updated: 2021.11.20

The Kitten and the Blue-Eyed Bloke by DearDiary
Chapter 1: The Kitten and the Blue-Eyed Bloke
Author's Notes: Hello, wonderful people!
Here's a story that is partially based on my real-life experience. I pulled out a kitten, I was stuck, it was night, and I got out - only there was no John to help me (sigh). I had to call my mother and sister for help (and for a chair to step onto). It was a fun night.
Anyway, here's something sweet and romantic for you this afternoon.
P.S. thank you, dear SunnieBelle, for your endless suport.
P.P.S. there are two quotes from "The End of the World" that don't belong to me. You'll recognise them immediately :) 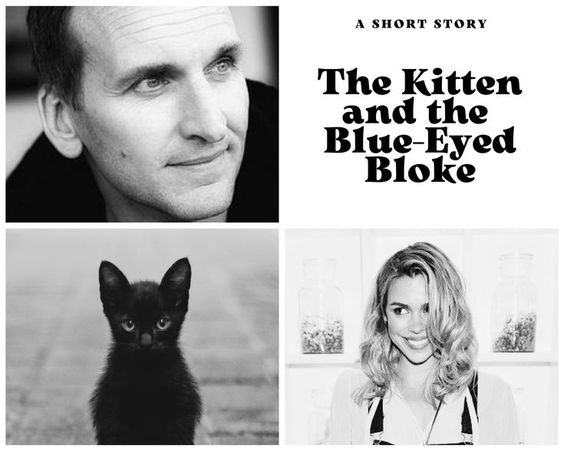 Rose only realised her mistake when the rescue mission was over.

She was standing in the hole in front of the basement wall, and the edge of it was only a couple of inches lower than her, and there was nothing to step onto to climb out of the hole.

Rose’s grunts and lame attempts to climb out of the hole were interrupted when a surprised male voice above her exclaimed:

“What are you doing there?”

Rose’s initial reaction was to chase the man away. She was embarrassed about the whole predicament enough as it was. But the thought of calling her mother to save her made Rose cringe in horror, and Shareen was probably already on her second, if not third, drink, quite possibly snogging some lucky bloke in the bar three streets away from there...Rose groaned and gently bumped her head into the concrete wall.

The bloke was still waiting.

Oh, what the hell. Rose decided to tell the truth.

“Rescuing the kitten,” she answered and realised a moment later that the kitten was around anymore - the blasted creature, the devil’s spawn, really, black, hissy, sharp-clawed, - it had skittered away to some other hole, or maybe it found its mother. Mama cat was the reason why Rose stopped in the first place: for once in her life she wasn’t listening to music in her headphones, and she heard a series of pitiful meows, and her heart clenched painfully when she saw a mama cat near the hole to the basement window, fretfully walking around, incapable of saving her kitten.

Well, what was Rose to do? She switched on a torch on her mobile phone and located the tiny black kitten huddling in the corner of the pit. The older cat ran away the moment Rose stepped closer to the basement window.

All things pointed for Rose to help the silly hissing creature. So, she tried doing so after jumping into the hole carefully. The little devil twisted and turned in her hands crazily like a wired toy, meowing angrily and scratching Rose in the process. It took three attempts to pick the kitten up and put it on the asphalt road, three attempts and a lot of swearing from Rose. The torch was of no use, she couldn’t hold it and catch the kitten at the same time, and now the satan’s creature was gone, fast as a lighting, blissfully unaware of Rose’s predicament.

Well, now there was someone here who could actually help her.

“Well what would you do that for?” the man’s silhouette asked, strangely indignant.

Rose gaped at him, gobsmacked, then snapped out of her surprised state when she heard the ‘new message’ chime of her phone. Some advertisements, most certainly. Not a lot of people texted Rose these days apart from Shareen, and it was certainly not Shareen. Not today. Rose was alone for now.

“Oh, shut up and help me!” she grumbled.

“Oi, that's not the way to talk to the person who can help you!”

“Don’t be ridiculous! It's dark! And you’re barely eye-to-eye with the surface!”

He was right but he was also rude.

“And the area is not very peopled here, either,” his Northern-accented voice noted excessively.

“Thanks for stating the obvious, mate,” Rose rolled her eyes.

The man came closer. Rose's heart slammed into her ribcage suddenly and fluttered nervously for the street was indeed dark and empty. Deserted even. And she was utterly in this man’s power and at his mercy, and she had no way out, literally.

She gulped and pressed herself into the wall, panicking.

Shit, shit, shit, screamed her mind on the loop, she should have called Jackie or even Shareen, she could do so now, maybe she’d be fast enough for him not to snatch the phone off her…

And then Rose saw the bloke's eyes widen in the diluted light of the street lamps. He took a step back immediately, raising his arms in the universal 'I won't harm you' gesture.

“I'm joking, Miss. Let me help you up. It's honestly rather late and I'd rather go home and eat something warm and listen to the radio instead of hanging out here on the outskirts.”

Who even listens to the radio these days?

The man’s shoulders dropped at her reluctant silence.

“I...look, do you want me to call someone? The police? To fetch someone from the street? Or maybe you have someone who could pick you up, a boyfriend or a mate…”

“I’ve no boyfriend,” replied Rose automatically, and then slammed her palm over her lips immediately.

What a stupid thing to say to a stranger at night, stuck as she was!

“Yeah, right,” it really wasn’t wise to make fun of a man in the alleyway but Rose felt slightly calmer when he laughed and didn’t get closer to her.

“I won’t be offended this time around because you are stressed but it is my real name, and I got laughed at enough during my life, thanks.”

Rose lowered her gaze and marvelled at her own rudeness while considering the man’s sincerity.

The man stepped away more and muttered, “I’m gonna ask for help - stay there, don’t move!”

Where am I gonna go? Ipswich? Wondered Rose, exasperated.

“Help me up, please,” and moved closer to the edge of the hole.

The sequence of events that followed her words could only be described as awkward. John tried pulling Rose out by taking her hands and tugging her upwards which resulted in a painful yelp from her, and he got so scared that he nearly dropped her.

Rose rather enjoyed the sensation of his calloused palms and graceful fingers on her hands, and she felt an exciting thrill travelling down her spine when his bigger hands enveloped hers. Rose tsked internally and swore off reading her mother’s historical novels because they tended to turn her into a dreamy, overly-excited fool. John attempted to pick Rose up by putting his hands under her armpits but it only resulted in Rose howling in laughter - she was ticklish there. Rose could swear that she saw a glimmer of a smile on John’s face at her impromptu laughing, and she felt one corner of her lips curl upwards in reply.

In the end John offered Rose to try climbing out of the hole sideways. She put her right arm and then hoisted her right leg over the edge while John supported her waist not to let her fall. Rose thanked her years in the gymnastics school because the residual flexibility allowed her to do the trick. John was the picture-perfect gentleman about her body, Rose noticed gratefully, his hands didn’t wander around her torso, and Rose appreciated that a lot after dealing with grubby boyfriends and handsy clients at the shop.

After several minutes of hushed laughter and swishing of the fabric against the edge of the basement hole, John finally helped Rose on her feet.

She felt so giddy, she wanted to hug the man!

“Are you hurt anywhere?”

Rose genuinely considered hugging John. How could she have thought him evil mere ten minutes ago?

She smiled shyly and adjusted her t-shirt that rolled over her belly in the struggle to climb out.

Rose noted smugly how her tongue-in-teeth smile made John’s eyes focus on her lips.

They walked into the more crowded area of the street together and stopped near the bright lights of the bus stop. At long last, Rose and John could see each other’s appearance clearly. Rose was excited to see the electric blue of John’s eyes, and giggled internally when she considered his ears a sign of masculinity, and she tried to look at his frame respectfully, without leering, merely appraising.

John did the very same and was instantly drawn to the girl’s beauty, sighing quietly. Such a girl was not for him. She was at least twelve years younger his age, and far too nice and vibrant for the likes of him.

His musings were interrupted by her Southern London lilt:

“Thank you, John, for helping me out. And sorry for snapping at you and thinking that you were, erm…” John smiled at the blonde’s embarrassment.

“Anyone would do the same, but you’re welcome. Thank you for rescuing the kitten…” he stopped, awaiting for her to introduce herself.

She widened her eyes in realisation and stuck her palm out for a handshake.

“Rose! Rose Tyler, that’s me. Sorry for not saying it earlier,” she pushed a lock of hair behind her ear with her free hand as John’s hand enveloped her smaller fingers and shook them gently.

John Smith honestly thought that that would be the end of their impromptu meeting. Rose would say goodbye to him and be on her merry way, leaving him mesmerised by her charming presence.

“Would you...that is, I would really like to thank you, John. Fancy some chips? I’m starving, really, and I’d love to thank you properly for helping me,” offered Rose to John’s immense surprise.

Well, one dinner certainly won’t hurt, and he really didn’t want part ways with Rose so soon after meeting her.

John bowed a little to her eye level when she dropped her gaze and scuffed her shoe on the pavement to catch her eyes.

Rose rewarded John with a brilliant smile and clasped his hand in hers as she tugged him through the London streets on the way to her favourite chippie.

The black kitten yawned and stretched languidly, arching its back before curling into its mother’s side.

It will know better from there on than to jump into some strange holes even if the basement radiators’ heat looks inviting.

Mother’s warmth was the best warmth in the world, after all.

This story archived at http://www.whofic.com/viewstory.php?sid=64167